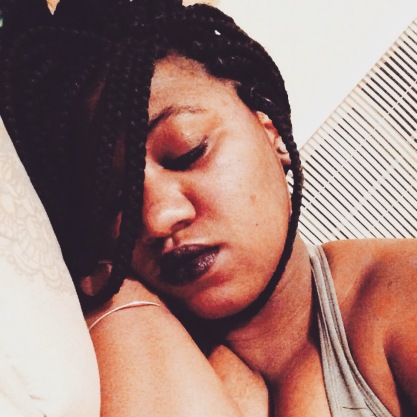 I had such a vivid dream last night. I was in an auditorium with a bunch of people I’ve met throughout my life: childhood friends, college friends, sorority sisters, co-workers from different jobs, etc. and we were all waiting on something. Something big. It was President Obama and he was coming to speak to apparently a bunch of students at an elementary school, but we were all there. As soon as he entered the auditorium, applause, screams, and cheers erupted. Everyone rushed to him for handshakes, hugs and selfies. I was one of those people, but when it was my turn, I couldn’t get my camera to work properly. The battery had died on me. So I pulled out my camera phone, but the memory was too full and no matter how much I deleted pictures and created memory space, it was still too full. Getting frustrated and feeling rushed, I pulled out another camera phone and whenever I pressed the camera app, it wouldn’t open. It kept crashing. So at this point, I’m getting anxious, the line is moving, my time is almost up so I’m begging people to use their cameras, camera phones, iPads, whatever so that I can take a picture with the President to post on social media. It was an epic fail. I did not get that picture with President Obama. I didn’t have a conversation with him. Nothing because I was too busy trying to literally capture the moment rather than create a lasting memory, gain some wisdom and make a connection. When I woke up this morning that epiphany dawned on me like cracking open a fortune cookie. I thought about how many times in my life I had done this.

How many times have I missed the marked? How many times have I missed out on a good connection, a teachable moment, and a lesson learned because I was too busy trying to capture the moment without making any memories? Think about it, we go to a fancy restaurant with an awesome person (maybe a date or a really good friend) and our plate comes and it’s this beautifully plated meal that we just have to capture. While we’re trying to set the table up to capture the beautiful set  up, our food is getting cold and our date is disinterested. We spend the rest of the date checking our notifications, seeing who’s liking what we’re eating and although we are paying attention to our date, they don’t have our undivided attention.

How many times have you gone to a networking event and didn’t network as much as you could have because you were taking selfies with others and speakers rather than creating conversation?

It’s like hey, I’m here and I want you to know that I’m here, but am I reeeaaaally here? Am I fully present in the moment?

The point is, be present in everything that you do. Put the phone down and make a real connection beyond finding people on social media. If you do meet someone on social media, reach out the them to meet in person if you’re in the same area. Make some new memories.